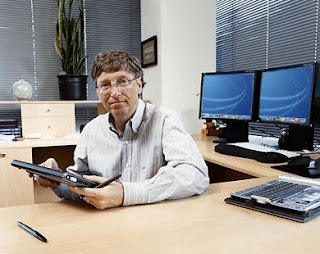 Former Microsoft chief Bill Gates is predicting that technology will drive every part of human life and foresees a fusing of television and the Internet.

Gates believes that the TVs of the future will connect to the Internet, perform search functions and locate videos using voice recognition.


“The devices that will be software-driven won’t stop at the personal computer, the full-screen device or the pocket-sized device, the phone. It will really be pervasive,” Gates said.

Microsoft Research Asia is currently conducting research on such televisions, where couch potatoes will key in search words with their remote controls, and the TV will search related videos using speech recognition technology. Users will also be able to customize channels with the search function.

Gates stressed that the Internet TV will only be part of the enormous change brought by technology within the next decade. “...the frontiers of software are constantly changing and that’s why this is an industry that’s so exciting,” he said.

Innovating for the better

Gates also shared his views on technology as solutions to global problems with university leaders, and stressed that innovations can change the world. He gave the example of the personal computer, describing it as “the best tool mankind ever created” when connected to the Internet, and said that many biological advances are achieved with the help of computers.

Chinese University of Hong Kong president, Lawrence Lau, highlighted the importance of the Internet in terms of knowledge distribution. He said access to broadband was crucial to overcoming poverty.

Two other local university leaders, Paul Chu and Tsui Lap-chee, agreed that properly managed technologies can solve global issues such as genetic diseases and even the energy shortage.