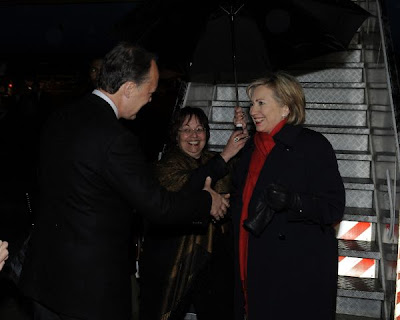 Hillary Clinton is on her first trip to the Middle East as secretary of state of the United States. She has the unenviable task of trying to please everyone and get the peace process back on track.

She comes bearing gifts: having stopped off in Egypt to attend an international donors conference that pledged $4.5 billion to rebuild the Gaza and help stimulate the Palestinian economy. Some $900 million of that comes from the United States.

But she arrives in Israel a firm opponent to Hamas which she says must recognize the state of Israel and renounce violence.

That being said, she is there to push the Obama administration's vision of a two-state solution. A daunting goal that many past U.S. administrations have unsuccessfully attempted to help reach.

"By providing humanitarian assistance to Gaza, we also aim to foster conditions in which a Palestinian state can be fully realized – a state that is a responsible partner, is at peace with Israel and its Arab neighbors, and is accountable to its people; a state that Palestinians everywhere can be proud of and is respected worldwide," Clinton said.

This comes against the backdrop of renewed rocket attacks against Israel. Outgoing Israeli Prime Minister Ehud Olmert is threatening retaliation.

Clinton meets with Palestinian President Mahmoud Abbas on the West Bank and Israeli officials in Jerusalem on Tuesday to discuss the possibility of renewing the peace process. But with disunited Palestinian territories - one controlled by Abbas, the other by Hamas, and with no established new government in Israel, it seems like any talks will be extremely preliminary at best.
Email Post
Labels: Gary Baumgarten Hillary Clinton Middle East