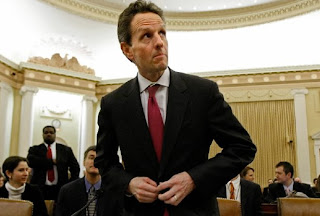 The Geithner-Summers Plan is Even Worse Than We Thought
by Jeffrey Sachs
Two weeks ago, I posted an article showing how the Geithner-Summers banking plan could potentially and unnecessarily transfer hundreds of billions of dollars of wealth from taxpayers to banks. The same basic arithmetic was later described by Joseph Stiglitz in the New York Times (April 1) and by Peyton Young in the Financial Times (April 1). In fact, the situation is even potentially more disastrous than we wrote. Insiders can easily game the system created by Geithner and Summers to cost up to a trillion dollars or more to the taxpayers.
Here’s how. Consider a toxic asset held by Citibank with a face value of $1 million, but with zero probability of any payout and therefore with a zero market value. An outside bidder would not pay anything for such an asset. All of the previous articles consider the case of true outside bidders.
Suppose, however, that Citibank itself sets up a Citibank Public-Private Investment Fund (CPPIF) under the Geithner-Summers plan. The CPPIF will bid the full face value of $1 million for the worthless asset, because it can borrow $850K from the FDIC, and get $75K from the Treasury, to make the purchase! Citibank will only have to put in $75K of the total.
Citibank thereby receives $1 million for the worthless asset, while the CPPIF ends up with an utterly worthless asset against $850K in debt to the FDIC. The CPPIF therefore quietly declares bankruptcy, while Citibank walks away with a cool $1 million. Citibank’s net profit on the transaction is $925K (remember that the bank invested $75K in the CPPIF) and the taxpayers lose $925K. Since the total of toxic assets in the banking system exceeds $1 trillion, and perhaps reaches $2-3 trillion, the amount of potential rip-off in the Geithner-Summers plan is unconscionably large.
The earlier criticisms of the Geithner-Summers plan showed that even outside bidders generally have the incentive to bid far too much for the toxic assets, since they too get a free ride from the government loans. But once we acknowledge the insider-bidding route, the potential to game the plan at the cost of the taxpayers becomes extraordinary. And the gaming of the system doesn’t have to be as crude as Citibank setting up its own CPPIF. There are lots of ways that it can do this indirectly, for example, buying assets of other banks which in turn buy Citi’s assets. Or other stakeholders in Citi, such as groups of bondholders and shareholders, could do the same.
Several news stories suggest some grounding for these fears. Both Business Week and the Financial Times report that the banks themselves might be invited to bid for the toxic assets, which would seem to set up just the scam outline above. What is incredible is that lack of the most minimal transparency so far about the rules, risks, and procedures of this trillion-dollar plan. Also incredible is the apparent lack of any oversight by Congress, reinforcing the sense that the fix is in or that at best we are all sitting ducks.
The sad part of all this is that there are now several much better ideas circulating among experts, but none of these seems to get the time of day from the Treasury. The best ideas are forms of corporate reorganization, in which a bank weighed down with toxic assets is divided into two banks - a “good bank” and a “bad bank” - with the bad bank left holding the toxic assets and the long-term debts, while owning the equity of the good bank. If the bad assets pay off better than is now feared, the bondholders get repaid and the current bank shares keep their value. If the bad assets in fact default heavily as is now expected, the bondholders and shareholders lose their investments. The key point of the good bank - bad bank plans is an orderly process to restore healthy banking functions (in the good bank) while divvying up the losses in a fair way among the banks’ existing claimants. The taxpayer is not needed for that, except to cover the insured part of the banks’ existing liabilities, specifically the banks’ deposits and perhaps other short-term liabilities that are key to financial market liquidity.
Cynics believe that the Geithner-Summers Plan is exactly what it seems: a naked grab of taxpayer money for Wall Street interests. Geithner and Summers argue that it’s the least bad approach to a messy situation, in which we need to restore banking functions but don’t have any perfect ways to do that. If they are serious about their justification, let them come forward to confront their critics and to explain to the American people why the other proposals are not being pursued.
Let them explain the hidden and not-so-hidden risks to the American taxpayer of the plan that they have put forward. Let them explain why they are so intent on saving the banks’ bondholders, even the long-term unsecured creditors who clearly knew they were taking market risks in buying Citibank bonds. Let them work with their critics to fashion a less risky and less costly plan. So far Geithner and Summers tell us that their plan is the only option, but without a word of further explanation as to why.

Nobel-prize winning economist Paul Krugman said in remarks published Monday that the latest U.S. Treasury bailout program is nearly certain to fail, triggering a sense of personal despair.
U.S. Treasury Secretary Timothy Geithner Monday unveiled a plan aimed at persuading private investors to help rid banks up to US$1-trillion in toxic assets that that are seen as a roadblock to economic recovery.
“This is more than disappointing,” Mr. Krugman wrote in The New York Times. “”In fact it fills me with a sense of despair.”
“The Geithner scheme would offer a one-way bet: if asset values go up, the investors profit, but if they go down, the investors can walk away from their debt,” the Princeton University economist said, citing weekend reports outlining the plan.
“This isn’t really about letting markets work. It’s just an indirect, disguised way to subsidize purchases of bad assets,” he added.
Mr. Krugman called it a recycled idea of former Treasury Secretary Henry Paulson, who later abandoned the “cash for trash” proposal.
“But the real problem with this plan is that it won’t work,” he says, adding that bad loans may be undervalued because there is too much fear in the current climate.
“But the fact is that financial executives literally bet their banks on the belief that there was no housing bubble, and the related belief that unprecedented levels of household debt were no problem. They lost that bet. And no amount of financial hocus-pocus -- for that is what the Geithner plan amounts to -- will change that fact,” Mr. Krugman wrote.
While the real economy is being hurt by the meltdown of the financial system itself, Mr. Krugman says this is not the first or the last time this has happened. And there are lots of roadmaps to get us out.
“It goes like this: the government secures confidence in the system by guaranteeing many (though not necessarily all) bank debts. At the same time, it takes temporary control of truly insolvent banks, in order to clean up their books,” Mr. Krugman said.
Time is running out on the Obama administration to take control of the banks - and the crisis.
“If this plan fails - as it almost surely will -- it’s unlikely that he’ll be able to persuade Congress to come up with more funds to do what he should have done in the first place,” he wrote.
The White House strongly disagreed with Mr. Krugman’s assessment, defending the administration plans on the morning talk shows.
“I think Paul’s just wrong on this one,” Christina Romer, head of the White House Council of Economic Advisers, said on ABC’s “Good Morning America” show just ahead of the plan’s release.
“This is really tails both the government and the private sector win, heads both the government and the private sector lose.We both are going to have, as the saying goes, skin in the game.”
Email Post
Labels: bankers Jeffrey Sacks.Tim Geithner Paul Krugman Summers Plan taxpayers wall street