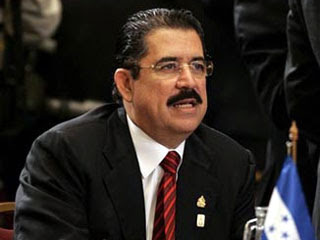 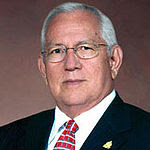 Micheletti was sworn in at a ceremony inside the Congress building with cheers and chants from fellow legislators of "Honduras! Honduras!"
Outside of Congress, a group of about 150 people opposed to Zelaya's ouster stood well back from police lines and shook their fists, chanting "Out with the bourgeoisie!" and "Traitors!"
Within hours, Micheletti declared a nationwide, 9 p.m. to 6 a.m. curfew for two days starting Sunday night. He told a news conference he had appointed a new foreign minister: lawyer and former Ambassador to the U.N. Enrique Ortez Colindres.
Micheletti insisted that he did not arrive at his new post "under the aegis of a coup d'etat."
"I have reached the presidency as the result of an absolutely legal transition process," he said.
He also defended the army, saying "the armed forces have complied with the constitution and the laws."
But he warned against outside interference after Chavez remarked that if Micheletti was appointed president, "We will overthrow him."
Micheletti acknowledged that he had not spoken to any Latin American heads of state, but said, "I'm sure that 80 to 90 percent of the Honduran population is happy with what happened today."
He also announced that Zelaya would be welcome to return to Honduras as a private citizen on one condition: "Without the support of Mr. Hugo Chavez, we would be happy to take him back with open arms," he said.
Zelaya's overthrow came hours before polls were to open on a constitutional referendum that he was pushing ahead even after the Supreme Court and the attorney general said it was illegal.

The constitution bars changes to some of its clauses, such as the ban on a president serving more than one term, they said.
Some businesses in the capital, Tegucigalpa, closed earlier this week amid the rising tension, and many speculated there would be a coup. Those who opposed the referendum warned against voting, fearing violence at the polls.
Countries throughout Latin America and the world condemned Zelaya's expulsion. Chavez said Venezuela "is at battle" and put his military on alert.
In Havana, Cuban Foreign Minister Bruno Rodriguez vowed to work with allies to push for Zelaya's return to power. He said Cuban Ambassador Juan Carlos Hernandez was held briefly in Tegucigalpa after he and other foreign diplomats tried unsuccessfully to prevent soldiers from taking away Honduran Foreign Minister Patricia Rodas.
Chavez said troops in Honduras temporarily detained the Venezuelan and Cuban ambassadors and beat them.

President Barack Obama said he was "deeply concerned" and U.S. Secretary of State Hillary Clinton said Zelaya's arrest should be condemned.
"I call on all political and social actors in Honduras to respect democratic norms, the rule of law and the tenets of the Inter-American Democratic Charter," Obama's statement read.
For those conditions to be met, Zelaya must be returned to power, U.S. officials said.
Two senior Obama administration officials told reporters that U.S. diplomats are working to ensure Zelaya's safety as they press for restoration of constitutional law and his presidency.
One of the officials said that the U.S. has been in touch with Zelaya since he was brought to Costa Rica, and has been trying to communicate with members of the Honduran Congress to insist that the new power structure step down.
The officials said that the Obama administration in recent days had warned Honduran power players, including the armed forces, that the U.S. would not support a coup, but Honduran military leaders stopped taking their calls.
The officials briefed reporters by phone Sunday on condition of anonymity, under ground rules set by the State Department.
The Organization of American States approved a resolution Sunday demanding "the immediate, safe and unconditional return of the constitutional president, Manuel Zelaya."
U.N. Secretary-General Ban Ki-moon condemned the coup and "urges the reinstatement of the democratically elected representatives of the country," said his spokeswoman, Michele Montas.
The Rio Group, which comprises 23 nations from the hemisphere, issued a statement condemning "the coup d'etat" and calling for Zelaya's "immediate and unconditional restoration to his duties."
Coups were common in Central America for four decades reaching back to the 1950s, but Sunday's ouster was the first military power grab in Latin America since a brief, failed 2002 coup against Chavez. It was the first in Central America since military officials forced President Jorge Serrano of Guatemala to step down in 1993 after he tried to dissolve Congress and suspend the constitution.
We thought that the long night of military dictatorships in Central America was over, said Costa Rican President Oscar Arias, who sat beside Zelaya at a news conference.
Zelaya told the Venezuela-based Telesur network that he was awoken by gunshots and the shouts of his security guards, who he said resisted troops for at least 20 minutes. Still in his pajamas, he jumped out of bed and ducked behind an air conditioner to avoid the bullets, he said.
He said eight to 10 soldiers in masks escorted him onto an air force plane that took him to Costa Rica.
They kidnapped him like cowards, screamed Melissa Gaitan. Tears streamed down the face of the 21-year-old, who works at the government television station. We have to rally the people to defend our president.
Many union and farm groups supported Zelaya's push for the referendum — which he said was aimed at changing policies that have excluded the nearly three-quarters of Hondurans who live in poverty.
Every Latin American nation (besides Honduras), plus the United States, Spain, France, and others, have publicly condemned the forced removal of Zelaya as undemocratic and most have labelled it as a coup d'état. Amongst the many reactions, Hugo Chávez, President of Venezuela, has said that his nation would respond militarily if the Honduran military enters the Venezuelan embassy and that it would mean a "de-facto state of war".[31] President of Paraguay Fernando Lugo said that the coup participants belong in prison. Americas-based international organizations such as the Organization of American States, Mercosur, and the Bolivarian Alternative for the Americas have also condemned the events. No nation has publicly declared support for the Honduran military's actions or for the new acting President Roberto Micheletti.


Secretary-General of the United Nations Ban Ki-moon "expresses his strong support for the country's democratic institutions and condemns the arrest today of the constitutional President of the Republic," a U.N. spokesman said in a statement.He (Ban Ki-moon) urges the reinstatement of the democratically elected representatives of the country and full respect for human rights, including safeguards for the security of President Zelaya, members of his family and his government. He calls on all Hondurans to engage peacefully and in the spirit of reconciliation to resolve their differences. The Secretary-General welcomes the prompt diplomatic efforts of the Organization of American States, whose Permanent Council is holding a special meeting this morning. The United Nations stands ready to provide assistance in overcoming this crisis. The U.N. General Assembly meets in emergency session Monday afternoon to debate the political crisis.

: Venezuelan President Hugo Chavez said that the coup called for Obama to speak out because the US "has a lot to do" with what happens in Honduras. A few hours later, Chavez put his military on alert and said he would do everything necessary to abort the coup in Honduras if anything were to happen to its embassy. He also warned that if a new government was sworn in he would "bring them down"

Declarations have used the word. Article 239 of Honduran Constitution, which forbids any former chief executive from being re-elected President, states that any citizen (including the president) who proposes reforming this law, and any others who support such a person directly or indirectly, are to immediately "cease carrying out" any public charge. There is, however, no constitutional process for impeachment or removal of a president.

The military claims to have been acting under the instruction of the Supreme Court of Justice, and their actions were ratified afterwards by both the court and the Liberal-majority National Congress. Zelaya is a member of the Liberal party. The National Congress named and ratified Roberto Micheletti, the next person in line for the presidency, within hours. The 3 state powers (Legislative, Judicial and Executive) are meant to act as checks and balances of each other, with the constitution being the basic law.

Also, a document sent to Congress purports to be a resignation from President Manuel Zelaya. President Zelaya denies quitting and the authenticity of this document. The succession, however, is based on Congress having removed him from office, not simply on his own alleged resignation.

The OEA is the only organization could interfere and avoid this unfair situation that all America is against to this actions.,and the OEA is calling to an urgent assembly for find a solution
Email Post
Labels: Coup Honduras Latinoamerica countries Micheletti OEA Zelaya

Mike Brady said…
"the Supreme Court and the Attorney Genreal" of Honduras "said was illegal" to do what Zelaya wanted to do, but he wasn't getting his way, so he was going to go ahead with his desires.

To judge the situation from afar is wrong. What would we do if our President went against the Congress, Senate and Supreme Court. Wouldn't we have to take drastic action. I am not for or against the replacement, just saying use your ears, eyes and brains people.