African Media: Obama Returned To “Continent Of His Birth” 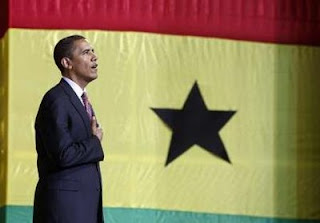 A major Ghanaian news outlet has been caught in a revealing slip-up after it reported that President Barack Obama’s recent visit to the African country was a return to his birthplace.

Article 2, Section 1 of the Constitution states, “No person except a natural born citizen… shall be eligible to the office of president.”

This invalidates the legitimacy of Barack Obama’s presidency if, as a growing number of people believe, he was in fact born in Kenya and not Hawaii as he claims. After mounting pressure, the Obama campaign released a Hawaiian birth certificate on June 13 2008, but skeptics claimed that it showed signs of being forged.

Contained in an otherwise relatively mundane account of Obama’s recent visit to Ghana in the Daily Graphics news outlet is a sentence sure to raise eyebrows amongst people about the Obama birth certificate scandal since well before the election.

The full paragraph reads, “For Ghana, Obama’s visit will be a celebration of another milestone in African history as it hosts the first-ever African-American President on this presidential visit to the continent of his birth.”

Why the Ghanaian news outlet would report that Obama was born on the continent of Africa, when this would instantly invalidate his entire presidency, is unclear.

In April a transcript from an interview with Obama’s step-grandmother was released in which she discussed being present at Obama’s birth in Mombasa, Kenya.

“WND is in possession of an affidavit submitted by Rev. Kweli Shuhubia, an Anabaptist minister in Kenya, who is the official Swahili translator for the annual Anabaptist Conference in Kenya, and a second affidavit signed by Bishop Ron McRae, the presiding elder of the Anabaptists’ Continental Presbytery of Africa,”.

In his affidavit, Shuhubia asserts “it is common knowledge throughout the Christian and Muslim communities in Kenya that Barack Hussein Obama, Jr., was born in Mombasa, Kenya.”

The hospital in Hawaii where Obama claims he was born has refused to produce documentation or even acknowledge the fact. Attempts to obtain Obama’s hospital-generated long-form original birth certificate have been rebuffed.

Doubts about Obama’s birth certificate are now spreading in military circles, U.S. Army Maj. Stefan Frederick Cook has refused to deploy to Afghanistan on the grounds that Obama is not a natural-born citizen of the United States and is therefore ineligible to serve as commander-in-chief. Cook’s lawyer, Orly Taitz, has filed separate lawsuits challenging the legitimacy of Obama’s presidency.

Cook said without a legitimate president as commander-in-chief, members of the U.S. military in overseas actions could be determined to be "war criminals and subject to prosecution."

He said the vast array of information about Obama that is not available to the public confirms to him "something is amiss."

"That and the fact the individual who is occupying the White House has not been entirely truthful with anybody," he said. "Every time anyone has made an inquiry, it has been either cast aside, it has been maligned, it has been laughed at or just dismissed summarily without further investigation.

"You know what. It would be so simple to solve. Just produce the long-form document, certificate of live birth," he said.

Cook said he was scheduled to report for duty tomorrow, on July 15, to deploy to Afghanistan as part of President Obama's plan to increase pressure of insurgent forces there.

Cook said he would be prepared for a backlash against him as a military officer, since members of the military swear to uphold and follow their orders. However, he noted that following an illegal order would be just as bad as failing to follow a legal order.

Named as defendants in the case are Col. Wanda Good, Col. Thomas Macdonald, Secretary of Defense Robert Gates and Obama, described as "de facto president of the United States."

According to the court filing, Cook affirmed when he joined the military, he took the following oath: "I, Stefan Frederick Cook, do solemnly swear (or affirm) that I will support and defend the Constitution of the United States against all enemies, foreign and domestic; that I will bear true faith and allegiance to the same; and that I will obey the orders of the president of the United States and the orders of the officers appointed over me, according to the regulations and the Uniform Code of Military Justice. So help me God."

According to the claim, "Plaintiff submits that it is implicit though not expressly stated that an officer is and should be subject to court-martial, because he will be derelict in the performance of his duties, if he does not inquire as to the lawfulness, the legality, the legitimacy of the orders which he has received, whether those orders are specific or general."

The military courts offer no option for raising the question, so he turned to civilian courts to consider "a question of paramount constitutional and legal importance: the validity of the chain of command under a president whose election, eligibility, and constitutional status appear open to serious question."

"Barack Hussein Obama, in order to prove his constitutional eligibility to serve as president, basically needs only produce a single unique historical document for the Plaintiff’s inspection and authentication: namely, the 'long-form' birth certificate which will confirm whether Barack Hussein Obama was in fact born to parents who were both citizens of the United States in Honolulu, Hawaii, in or about 1961," explains the complaint.

Taitz said she will attend the hearing to amend the temporary restraining order to an injunction because more members of the military have joined the cause.

"We are going to be asking for release of Obama's records because now this completely undermines the military. It revoked this order, but it can come up with another order tomorrow. It can come up with orders for other people," she said. "Am I going to be flying around the country 1,000 times and paying the fees every time they issue an order?"

Taitz said the issue "must be resolved immediately," and she will continue working to ensure Obama proves he is eligible for office.

"We're going to be asking the judge to issue an order for Obama to provide his vital records to show he is legitimately president," she said. "We're going to say, we have orders every day, and we'll have revocations every day. This issue has to be decided."

Asked what this decision means for every other serviceman who objects to deployment under a president who has not proven he is eligible for office, Taitz responded:

"Now, we can have each and every member of the military – each and every enlistee and officer – file something similar saying 'I will not take orders until Obama is legitimately vetted.'"

Multiple questions have been raised about what that would mean to the 2008 election, to the orders and laws Obama has signed and other issues, including whether he then is a valid commander-in-chief of the military.

Complicating the situation is Obama's decision to spend sums estimated in the hundreds of thousands of dollars to avoid releasing a state birth certificate that would put to rest all of the questions.

The "Certification of Live Birth" posted online and widely touted as "Obama's birth certificate" does not in any way prove he was born in Hawaii, since the same "short-form" document is easily obtainable for children not born in Hawaii. The true "long-form" birth certificate – which includes information such as the name of the birth hospital and attending physician – is the only document that can prove Obama was born in Hawaii, but to date he has not permitted its release for public or press scrutiny.

Oddly, though congressional hearings were held to determine whether Sen. John McCain was constitutionally eligible to be president as a "natural born citizen," no controlling legal authority ever sought to verify Obama's claim to a Hawaiian birth.

Although Obama officials have told WND all such allegations are "garbage," here is a partial listing and status update for some of the cases over Obama's eligibility:

In addition, other cases as raising questions about Obama's eligibility include:

smrstrauss said…
Re: "“WND is in possession of an affidavit submitted by Rev. Kweli Shuhubia"

Rev. Kweli Shuhubia is a pseudonym, so that cannot be a legal affidavit. If it were common knowledge in Kenya that Obama was born there (and he wasn't born there), then someone in the reputable media, such as the MSM or the foreign press, such as AFP or even the press of Russia or China would have picked up the story. ONLY WND claims that files were sealed in Kenya. No one else has reported that there are files, or that there were any files sealed.

It is as unlikely as his being born on Mars. His mother would have had to go to Kenya while she was pregnant at a time when there were no direct flights and when you had to get a Yellow Fever shot to go to Africa (very bad during pregnancy).

If that is too difficult to listen to, here is a transcript. http://www.obamaconspiracy.org/wp-content/uploads/2009/03/obamatranscriptlulu109.pdf


There are Hawaii government records showing that Obama was born in Hawaii and they have been confirmed by the two officials who looked into the file and said that there was an original birth certificate in it, and a spokewoman for the Department of Health then said that the finding of an original birth certificate means that Obama was born in Hawaii. http://www.swamppolitics.com/news/politics/blog/2008/11/obama_hawaaianborn_citizen_for.html