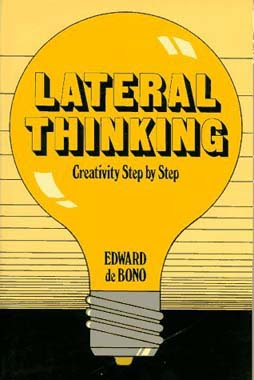 Edward de Bono is regarded by many to be the leading authority in the world in the field of creative thinking and the direct teaching of thinking as a skill. He has written 62 books with translations into 37 languages and has been invited to lecture in 54 countries. He is the originator of lateral thinking which treats creativity as the behaviour of information in a self-organising information system - such as the neural networks in the brain. From such a consideration arise the deliberate and formal tools of lateral thinking, parallel thinking etc.

Politics is mainly made up of wordy people such as lawyers, teachers, journalists and trade unionists. Such people do not have much experience of constructive thinking - of making things happen. There are many engineers, architects, scientists or executives. Such people do not want to take the risk. If you are not elected the second time you cannot go back to where you were.

"On the Internet there is much misleading and erroneous information about 'lateral thinking' and 'parallel thinkingtm'. Some of the sites make false claims about me and my work. Because this is my official website I want to take this opportunity of clarifying matters regarding lateral thinking and parallel thinking

I invented the term 'lateral thinking' in 1967. It was first written up in a book called "The Use of Lateral Thinking" (Jonathan Cape, London) - "New Think" (Basic Books, New York) - the two titles refer to the same book.

For many years now this has been acknowledged in the Oxford English Dictionary which is the final arbiter of the English Language.

There are several ways of defining lateral thinking, ranging from the technical to the illustrative.

1. "You cannot dig a hole in a different place by digging the same hole deeper"

2. "Lateral Thinking is for changing concepts and perceptions"

With logic you start out with certain ingredients just as in playing chess you start out with given pieces. But what are those pieces? In most real life situations the pieces are not given, we just assume they are there. We assume certain perceptions, certain concepts and certain boundaries. Lateral thinking is concerned not with playing with the existing pieces but with seeking to change those very pieces. Lateral thinking is concerned with the perception part of thinking. This is where we organise the external world into the pieces we can then 'process'.

This is a technical definition which depends on an understanding of self-organising information systems.

4. "In any self-organising system there is a need to escape from a local optimum in order to move towards a more global optimum. The techniques of lateral thinking, such as provocation, are designed to help that change."

This is another technical definition. It is important because it also defines the mathematical need for creativity.

I introduced this term in my book 'PARALLEL THINKING' (published by Viking, London and Penguin Books, London).

Parallel thinking is best understood in contrast to traditional argument or adversarial thinking.

With the traditional argument or adversarial thinking each side takes a different position and then seeks to attack the other side. Each side seeks to prove that the other side is wrong. This is the type of thinking established by the Greek Gang of Three (Socrates, Plato and Aristotle) two thousand four hundred years ago.

Adversarial thinking completely lacks a constructive, creative or design element. It was intended only to discover the 'truth' not to build anything.

With 'parallel thinking' both sides (or all parties0 are thinking in parallel in the same direction. There is co-operative and co-ordinated thinking. The direction itself can be changed in order to give a full scan of the situation. But at every moment each thinker is thinking in parallel with all the other thinkers. There does not have to be agreement. Statements or thoughts which are indeed contradictory are not argued out but laid down in parallel.In the final stage the way forward is 'designed' from the parallel thought that have been laid out.

A simple and practical way of carrying out 'parallel thinking' is the Six HatsTM method which is now being used widely around the world both because it speeds up thinking and also because it is so much more constructive then traditional argument thinking.

Information on Lateral Thinking and Six HatsTM methods are available on this website. Particulars of training courses are also given.

One of the classic lateral thinking puzzles involves nine dots, as in the example above. The challenge is to connect them all in four straight lines, without lifting the pen or pencil from the page. When you figure this one out you will have a new appreciation for the expression "thinking outside of the box." Lateral thinking puzzles like this help you increase your brain power by getting you out of thinking "ruts." They habituate you to creative thought as a normal function of thinking and problem solving

A way of understanding lateral thinking is through its opposite, vertical thinking. A vertical thinker is analytical, careful and precise, taking the data around a problem and analysing it with defined methodologies to find logical solutions. A lateral thinker understands vertical thinking, but chooses to deliberately outside of this bounded thought process. One reason that you have to dig in many other places is that creativity is like a joke: you do not get it until the punch-line at the end. It is not an easy concept to teach and a good way to learn is through examples. Here is one that de Bono used in his original book:

There is a girl who is to be gambled by her father against a heavy debt. If she draws a white pebble from a bag containing one white and one black pebble, the debt is cleared and she is freed. If, however, the black pebble is drawn out, she must go with the merchant. The dilemma is that she sees the merchant sneak two black pebbles into the bag, so what should she do? The vertical thinker considers all options and concludes that she should say what she has seen. The lateral thinker, however, thinks beyond this solution that, at best, leaves the girl with a 50% chance of freedom. If we think about the pebble that is left behind, which is black, all she has to do is pull out one pebble, and whilst keeping concealed, clumsily drop it where it cannot be found, then say ‘All we need to do is look at the pebble that is left.’

Lateral thinking is thus very much about standing back, looking at the big picture and understanding concepts. It also requires that you focus in on the parts that have perhaps been overlooked, challenging assumptions and seeking alternatives.