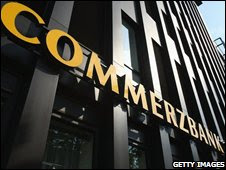 Germany's second biggest bank, Commerzbank, reported Friday a 2008 net loss of 6.6 billion euros (nine billion dollars), including its recently acquired Dresdner Bank business. Commerzbank had posted a net profit of three million euros in February but that figure did not include results from Dresdner, a bank bought from the insurance group Allianz for 4.7 billion euros. Commerzbank waited until it published its annual report to present pro forma results that included Dresdner. "The overriding theme of 2009 will be the integration of Dresdner Bank," Commerzbank said.
Commerzbank also said that it expected restructuring and insolvencies to increase considerably this year.
"In 2009, nearly all portfolios are suffering from the stress caused by market conditions, which is why the bank's results will be strongly affected by charges against earnings," said Commerzbank in its 2008 annual report.
The bank, whose main business is to lend to small and medium-sized businesses, has said it will endeavour to refinance 20bn euros of business this year.
It was among Friday's early winners on the German stock market, gaining 5.7% to hit 4.30 euros in early morning trading.
Email Post
Labels: Banks Commerzbank Dresdner German Bank Insolvencies