Fed As Policeman For Economy A Big Mistake 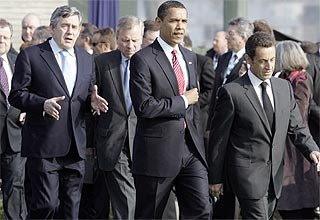 Economy in a shambles, Growth not in the equation, Fed stifles US Treasury, More powers for Fed not the answer, more ponzi schemes before the courts, real GDP shrinking this year, More power for failed regulators a serious suggestion

As you have already seen this is a worldwide depression and no one will escape. Europe’s economy is already in a shambles as is the US economy. Inflation will rage all over the world, because every nation has created massive amounts of money and credit as demanded by US and British elitists. They have all overmedicated the patient. As the Broadway hit play of many years ago told us, we are going to have to go through a “Period of Adjustment.” Some nations will get off easier than others. There will be no decoupling and many nations could have revolutions.

Government spending and increased debt has been taken on by all countries and to in part pay for that taxes will rise everywhere. Deficits will hit records as far as the eye can see. You can’t have massive spending, massive debt and massive tax increases and expect to have growth. It is impossible.

Thus far government has been able to paper over the systemic meltdown in the financial area. They still haven’t dealt with off balance sheet and derivative losses. Even with the trillions poured into these entities it has not been enough to solve their problems and over the next few years that will become obvious.

The Treasury plans of having the fox, the Fed, take over the chicken coop is pure insanity. These are the very people who caused the problem by encouraging mis-rating, securitization and lending that defied reality. Now the Fed is to become policeman. It is really insulting and removes any sense of security from the system.

The problem of protecting consumers lies in the hands of the Fed, raters, lenders and Wall Street. Greed overcame any semblance of prudence.

The Treasury, as stated under the Constitution, should have the authority to solve financial crisis, but they cannot because the Fed has the tools to do so. Those tools have to be put in the hands of the Treasury again. It is not a cure all, but it is a step forward. That has to be accompanied by ending the revolving door between banking, Wall Street and the positions appointed in Washington, especially the Treasury.

Giving the Fed more powers to regulate is not addressing the underlying problem and shifting private debt into public debt isn’t an answer either. The main cause of the problem is leverage, securitization, and globalization and the massive use of derivatives. Free trade and globalization are the worst and have caused wage-price imbalance and stripping America of its ability to compete.

The advantages all accrue to transnational conglomerates and third world nations. This enriches the rich and takes the living standards in the US, Canada and Europe down to the levels of the third world.

Why would our president want the Fed to have day-to-day supervision over the largest bank holding companies, which own the Fed? This is the group that caused all these failures. The Fed would have a financial empire that would allow them to engage in greater corruption. It would control a financial colossus.

Then the FDIC would receive more powers to wind down whatever banks they decided would be eliminated. If large banks can be bailed out, why can’t small banks receive equal treatment? That is because the big banks want to absorb the small and medium-sized banks eventually leaving us with 20 with a monopoly in banking. This is where this is headed. We are also told many more banks have gone under than we’ve been told about. Insiders expect 500 to 800 will go under this year, not the publicly announced 35 or 45.

Thus, the Fed and the FDIC are to be rewarded for failure. They didn’t use their regulatory powers over banks in mortgage lending, rating and securitization.

The plan of the administration is a copy of the Paulson plan to concentrate more power with the Fed. They have eliminated the Office of Thrift Supervision and merged it with the Comptroller of the Currency.

They previously proposed a merger of the CFTC and SEC, which isn’t about to happen.

The litany goes on and American waits for the other shoe to drop as it falls deeper into depression. As you can see this is a struggle to give the Fed total financial control over America. It can only end in disaster.

The Fed may revamp the repo market for they fear existing arrangements could put the clearing banks in a difficult position in a crisis. As securities’ values fall, clearing banks have to demand more capital or collateral to avoid losses. In that process they could destabilize the market. Positions of investment banks are so large that a default could be fatal. The solution, of course, is that the Fed takes over the defaulted positions to keep its monopoly in tact. The two banks at great risk are JPMorgan Chase and Bank of NY Mellon, both shareholders in the Fed.

A quarter of US employers have eliminated matching contributions to employee 401(k) retirement plans since September. Most say it is temporary, but don’t believe it.

If exports don’t pick up soon the IMF says the dollar will need to be devalued.

JPMorgan Chase & Co. is raising some balance-transfer fees on credit cards to 5 percent, the highest among the nation’s largest banks, citing increasing regulations and costs after the United States put new curbs on the industry.

The lender starts charging more in August, just as the law to curb interest-rate increases, fees, and marketing practices begins to take effect.

“What Chase is doing is strengthening the argument for the new entity,’’ Frank, a Massachusetts Democrat, said yesterday before the hearing. Banks should be able to impose fees to cover their costs, not to create a “new profit center,’’ he said.

JPMorgan’s previous average fee for balance transfers was 3 percent, spokesman Paul Hartwick said. He declined to say how many customers will be affected. The increase also applies to cash advances, and fixed interest rates will become variable, the notice said. JPMorgan may choose to offer a lower transfer fee, the notice said; Hartwick declined to elaborate.

“In the current economic environment, our costs of doing business have been impacted by increased losses,’’ Hartwick said in an e-mail. “We are increasing balance-transfer fees to reflect the increasing costs.’

A 65-year-old Massachusetts investment manager pleaded guilty to securities fraud for running a Ponzi scheme that cost 70 investors, many from the Bay State, about $9 million.

Michael C. Regan, 65, faces up to 20 years in jail and $5 million in penalties after settling the criminal charges with federal officials in New York. He also settled similar civil charges with the Securities and Exchange Commission, in which he agreed to repay more than $8.7 million.

Officials have not yet determined whether Regan has money or other assets to repay his victims.

And he could face additional fines, SEC spokesman David Rosenfeld said. “We’ll try to find whatever can be recovered in order to [get it] to the investors,’’ he said.

Like convicted swindler Bernard L. Madoff, Regan promised investors consistently high returns. He told them his River Stream Fund had earned about 20 percent a year since 2001, using a trading strategy based on short-term market trends, authorities said. In fact, River Stream lost money or had minimal returns most of the time, paid as much as $9 million in bogus profits, and returned capital to investors with money given to him by other investors, according to court documents. Meanwhile, Regan took more than $2.5 million in fees for himself.

Before his fund collapsed in April 2008, Regan claimed it held about $18 million, when in reality it had only $101,600, according to prosecutors.

The Labor Department said the number of mass layoff actions -- defined as job cuts involving at least 50 people from a single employer -- increased to 2,933 in May from 2,712 in April, resulting in the loss of 312,880 jobs.

Household-products maker Kimberly-Clark Corp. said it plans to cut 1,600 jobs, or 3 percent of its global work force, as it slims down in the tough economy.

The maker of Kleenex tissues, Huggies diapers and scores of other household items employs 53,000 people around the world. It plans to make the cuts primarily among salaried and non-production workers and executives said the company doesn't plan to close any plants.

The number of Americans filing claims for unemployment benefits rose again in June, a reminder that companies will keep cutting staff even as the economy stabilizes.

As another 467,000 jobs were lost in June and initial jobless claims rose by 15,000 to 627,000 in the week ended June 20, up from a revised 612,000 the week before, the Labor Department said in Washington. A report from the Commerce Department showed gross domestic product shrank at a 5.5 percent annual pace in the first three months of the year.