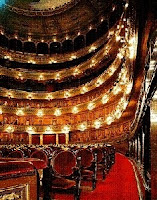 The venerable Teatro Colon will reopen in May after three years of restoration works, with a star-studded opera calendar that includes Puccini's La Bohème and Mozart's Don Giovanni.

The Teatro Colon of Buenos Aires has already presented its program for the 2010 Season. Happily, the companies will return to the theater's concert hall that will be inaugurated on May 25th, 2010, with a Reopening Gala in celebration of the May Revolution Bicentenary. The 2010 Season will feature great figures as Daniel Barenboim, Zubin Mehta Paloma Herrera, and Yo-Yo Ma.

Once considered one of the world’s top five opera houses, Buenos Aires’ Teatro Colón has played host to musical legends like Igor Stravinsky, Richard Strauss, Luciano Pavarotti and Arturo Toscanini. But when the curtain fell on Swan Lake in October 2006, many wondered if the aging and badly neglected theatre would ever regain its former glory. Shortly thereafter, the City embarked on an ambitious $100 million renovation project to restore something the Colón once boasted: perfect acoustics. A botched mid-80’s mini-renovation changed that and performances over the ensuing twenty years were marred by thin sound and noticeable reverberations. A team of architects, engineers and renovation experts spent the past three years demolishing and then renovating everything from the stage to the balconies to the freight elevators. Unfortunately peeling an onion of that magnitude began to reveal more serious structural problems, so the planned 2008 re-opening (for the 100th anniversary) was postponed until this year’s Bicentennial celebration in Buenos Aires. Despite doubts and criticism from opposition parties, the Government of the City of Buenos Aires persevered and the Colón is finally ready for her debut on May 24. Actually a dress rehearsal was held last night, according to Clarín, for the hundreds of workers involved with restoring the most important cultural symbol in Argentina. Shortly after 8:00, the conductor took the stage and the sounds of Beethoven’s Ninth Symphony soared through the hall. As for the restoration of the once-perfect acoustics, the conductor’s comment says it all, “We cried like little boys.” (Teatro Colón)

The theater opened on May 25, 1908, the Día de la patria (Motherland Day) in Argentina, with a performance of Verdi's Aida. It quickly became a world-famous operatic venue rivaling La Scala and the Metropolitan Opera in attracting artists.

With excellent acoustics and modern stage areas, the theater's interior design features a rich scarlet and gold decor. The cupola contains frescoes painted in 1966 by the renowned 20th century artist Raul Soldi during the renovation work.

Ever since the staging of Aída, various figures performed on this prodigious stage. Dance and ballet artists played their roles here and not only did they leave a long-lasting mark but also found in most cases the top roof of their careers thanks to the theater. Celebrities like Arturo Toscanini, Enrico Caruso and Titta Rufo, Richard Strauss and Arthur Nikisch, Lily Pons, Igor Stravinsky, María Callas and Maia Plissetskaya, to name a few, have accounted for what the Colón represented.

Luciano Pavarotti, considered by many as the greatest tenor in history, said about the theater: "…it has a very big defect, its acoustic is simply perfect. Imagine what that means for a singer: if one makes a mistake, it is noticed immediately …"

Plácido Domingo, another great tenor of the XX century, reviewed: "…what has impressed me most about the Colón Theater has always been its orchestra and its choir, as well as the wonderful workshops that work out any problem in a matter of minutes. The Colón is a marvelous theater, I would say it cannot be compared to any other theater in the world, because in addition to its artistic history, only masterpieces have been presented in its stage ever since its inauguration"BICENTENARIO (BICENTENARY CONCERTS)
A total of 8 concerts that will get together some of the most resounding figures in the season: Daniel Barenboim, Zubin Mehta and Yo-Yo Ma.